Located at the end of the Romsdalsfjord, the ninth longest in Norway, Åndalsnes is blessed with a wonderful setting, between the lofty mountain peaks and the waters of the fjord. This is a small town, and you don’t even really need a map to get around it. This destination is all about exploring the breath-taking scenery. Welcome to our Andalsnes cruise port guide.

The Tindekaia pier acts as the main cruise pier in Åndalsnes is located in the heart of the small town. There are no facilities at the port, but being within 400m of the centre is handy for all the amenities of town. Tourist information can be found in the train station building, only 150m from the pier and on the walking route into town. Here you can book independent trips using local taxi providers and tour operators, plus pick up maps and leaflets for local attractions and walking routes.

The Raumabanen’s been described as one of the finest stretches of railway in Europe, having first opened in 1924 after 40 years of planning and is the best way to experience the beauty of the Rauma Valley. The train station is located next to the port at 4 metres above sea level and the line ends in Dombås, 659 metres above sea level, 100 kilometres away. Since the route started almost 100 years ago it has played an important role for the people of Åndalsnes and to a wider extent Norway, transporting the Bank of Norway’s gold reserves to safety during the Second World War and in recent times transporting all the cruise ship tourists through the Rauma valley. It has even become famous in the movies, having been featured in Harry Potter and the Half Blood Prince standing in for the Hogwart’s Express route using a veteran train belonging to the Norwegian Railway Club.  The Rauma Railway is part of the Norwegian National Rail Service and tickets can be obtained at the railway station near to the port or online in advance via https://www.vy.no/en or https://entur.no/?lang=eng

Meaning Troll Wall, this is one of the most impressive rock faces, and in fact the tallest vertical rock face in all of Europe. It rises up over 1,100 metres (3,600 ft) as part of the mountain massif Trolltindene, or Troll Peaks.

Also known as the Troll’s Path or Way of the Trolls, this mountainside road has 11 hair pin bends, winding over 700 metres (2,300 ft) high to a viewing plateau and is overlooked by mountains known as The King, The Queen and The Bishop. The Stigfossen waterfall falls 320 metres (1,050 ft) down the mountainside and can also be viewed from the viewing platforms at the rest stop area.

There are a few hiking routes from the port, the most impressive being the hike up the Romsdalseggen to the Rampestreken viewpoint. It takes about 1 hour to 90 minutes to make the ascent up to the summit of Nesaksla, 715 metres above sea level. From here you have sweeping views of Åndalsnes, The Rauma Valley and the Romsdalsfjord. The start is fairly simple with organized walways to the Nebba viewpoint over the Rauma River, before it gets tougher on the Romsdalstrappa. This is a series of natural stone stairs built by Nepalese Sherpas that leads to a viewpoint called Rampestreken. This metal viewing platform is very impressive, jutting 6.5 metres out into thin air, 550 metres above sea level. An extra 20 minutes will bring you to the summit for more stunning views.

Åndalsnes is typically a cold and temperate location in Norway, and its warmest month of July is still relatively cool, with an average temperature of around 12 degrees Celsius. July and August are also the wettest months of the year.

The town itself is all easily accessible on foot, with the train services being the other main form of transport. Locally you will find taxis providing options for private transportation provided by Rauma Taxi AS.

Åndalsnes is a very quiet town and very safe, with welcoming and friendly locals.

Located inside the Norsk Tindesenter, with outdoor seating overlooking the fjord, Tindestua is a casual dining experience that serves up food with a bit of mountain inspiration. 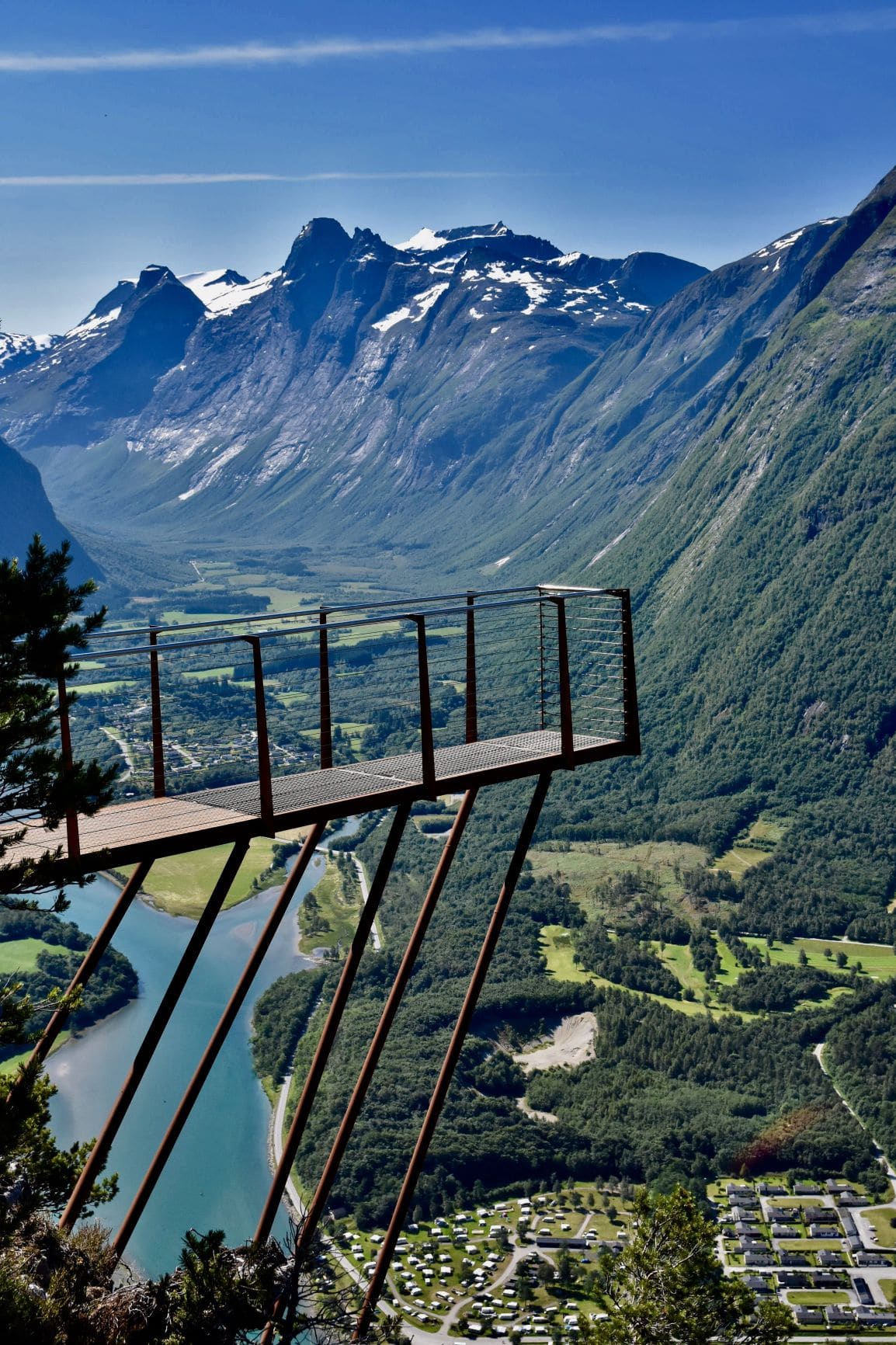 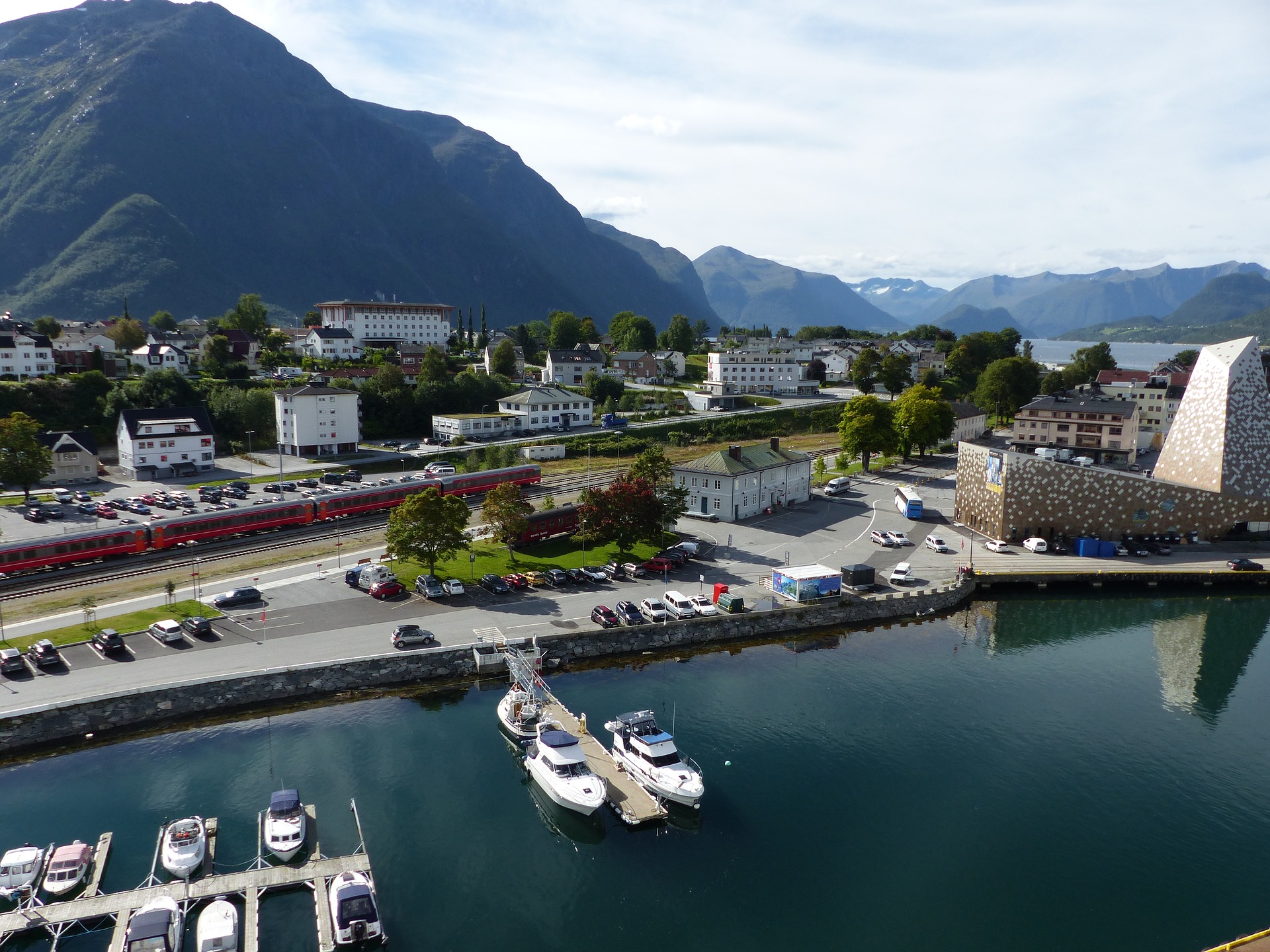