The medieval city of Bruges is like taking a step back to the middle ages, with most of its 13th Century architecture intact, a skyline punctuated by church spires and cobble stoned streets interspersed with canals. A UNESCO World Heritage Site since 2000, Bruges is a living museum and the main touristic site in West Flanders. It was once an important commercial centre and part of the famous Hanseatic League of merchant cities that spanned Northern Europe, due to its location at the crossroads of continental trade. Welcome to our Bruges cruise port guide.

Its success was down to its access to the North Sea via a tidal inlet known as the Golden Inlet, but this silted up and ended the golden era of the city starting from the 16th Century and Antwerp replaced it as the most important port city in Belgium. However, Bruges was revitalised during the 19th century as a tourist destination popularised by rich British and French tourists, and after the Second World War the city set about a renaissance period of renovation of the city’s buildings, resulting in Bruges being awarded the designation of European Capital of Culture in 2002.

Bruges is accessed from the gateway port of Zeebrugge, a large commercial port that is one of the largest in Europe. For cruise ships facilities include a small terminal building with tourist information and a souvenir shop, as well as independent tour operators and taxi drivers to take you in to Bruges. Most cruise lines operate a shuttle service to the nearby seaside resort of Blankenberge, where you can explore this bustling town, or take the convenient train service into Bruges.

The centre of the medieval city, this was at one time the main marketplace and meeting point of Bruges. Today it is surrounded by pretty multi coloured gable ended buildings now home to restaurants and shops, and where in winter time, the Christmas market and ice rink are hosted.

The Belfry of Bruges

Built in the Markt in the mid 13th Century, the Belfry is one of the most prominent symbols of Bruges that provides visitors with a perfect vantage point to view the city from up high. To get to the top of the 83m (272ft) tower, you first must navigate 366 steps and there is no lift to help.

The other highlight building of the Markt is the former meeting place for the provincial government of West Flanders. The first government building on site, the Waterhalle, was built in 1294, but was demolished when boats could no longer reach the city via the Golden Inlet. The new government building was built at the end of the 18th Century, but burnt down, before the current building was completed in 1920 and acted as the government meeting hall until 1999. The building is striking due to its Gothic Revival style and is currently undergoing a renovation to welcome visitors once again.

Located in the Burg square, one of the oldest parts of the city and once a fortress, the City Hall was built in 1421 in gothic style and demonstrates the power and wealth which Bruges had obtained through trade. The design has inspired city hall designs across Belgium throughout the centuries, including those in Brussels and local rival Ghent.

The Basilica of the Holy Blood

Tucked away in a corner of the Burg square, this Roman Catholic basilica is said to contain a relic of Holy Blood of Jesus collected by Joseph of Arimathea and brought back by Thierry of Alsace, Count of Flanders. It was built to house the relic between 1134 and 1157, consisting of the original Romanesque lower chapel and the renovated upper chapel built in gothic style and where the relic is kept.

Church of Our Lady

The tallest structure in the city and having the second tallest brick tower in the world at 115.6m (379ft), the church was built from the 13th to 15th Centuries as an expression of the wealth of the devoted Catholic city. Inside the church has a baroque interior that is home to a white marble sculpture by Michelangelo depicting the Madonna and Child, dated from 1504.

The only remaining beguinage in the city, it no longer hosts any beguines but is home to a Benedictine convent. The complex has a gothic church and white painted houses from the 16th to 18th Centuries, built around a central yard. One of the houses is now used as a museum showcasing paintings, furniture and lacework.

Quite possibly the most photogenic part of the city, this canal embankment offers stunning views of the medieval core of the city, surrounded by cafes and shops as well as embarkation points for the canal boat tours.

The place to visit if you want to view six centuries of Flemish art from masters like Jan van Eyck. The collection also includes Renaissance and Baroque art, Flemish Expressionism, Realism and Modernism.

No visit to Bruges is complete without visiting one of the many chocolate shops and sampling the delights of Belgian chocolate. If you want to discover all there is to know about chocolate in this part of the world, then Bruges chocolate museum is the place to head to. Exhibits include the history of chocolate, the health benefits of chocolate and even chocolate making demonstrations.

The currency in Belgium is the Euro.

Bruges has very distinct seasons and cruise ships tend to visit throughout the year, so plan accordingly for your particular visit. The summer period across June, July and August often has temperatures ranging from 20-25 degrees Celsius, with February the coldest month around 6 degrees Celsius and November the wettest month.

The medieval centre of Bruges is easily walkable and has mostly been pedestrianised to allow for safe exploration on foot. Be aware that the city has a lot of cobble streets making it a bit uneven in places.

Bruges does have a city bus network that links the train station with the historic centre and for more information on public transport, including prices, routes and schedules check out https://www.delijn.be/en/

For information of train services between Bruges and nearby towns and cities, including from Blankenberge, check out https://www.belgiantrain.be/en

Bruges is one of many cities in Northern Europe that goes by the moniker ‘Venice of the North’, due to its inner-city canal network. You will find five embarkation points for canal boat tours that last for 30 minutes dotted around the city and these operate from March to November. For more information and prices check out https://www.visitbruges.be/en/bruggemetdeboot

For sightseeing bus tours, including information on the routes and prices, check out http://www.citytour.be

Bruges is a very safe and friendly city, although with large amounts of tourists visiting every year, petty crime can occur so pay extra close attention when you are in busy, crowded tourist hotspots.

Located on Walplein close to the Beguinage, this brewery offers a visitor centre, a brewery tour and attached restaurant, that can trace its heritage back to the 16th Century and the Maes family have owned the site since the 1800s. The main reason for visiting is for the traditionally brewed blond beers, but they have a nice à la carte menu and a market menu that uses seasonal, local ingredients and changes every month.

In our opinion the best burger joint in Bruges, a stone’s throw away from the Markt on a back street meaning the prices are reasonable and it isn’t as busy as those restaurants that look out onto the square. The rock and roll themed interior is fun and vibrant, perfect for Instagrammable content, and the menu is comprehensive, with over 30 burgers to choose from including chicken, lamb, fish or vegan as well as beef, or you can make your own. Their home-made beer is also worth a try, a 5.2% Pils straight from the tap.

Okay so not exactly a place to find an extensive menu, but this coffee bar tucked away behind the Markt is a coffee lovers paradise. It has a wide selection of beans roasted on site and a great selection of sweet and savoury snacks to accompany that perfect cup of coffee and to takeaway, providing you more time to explore the highlights of the city. 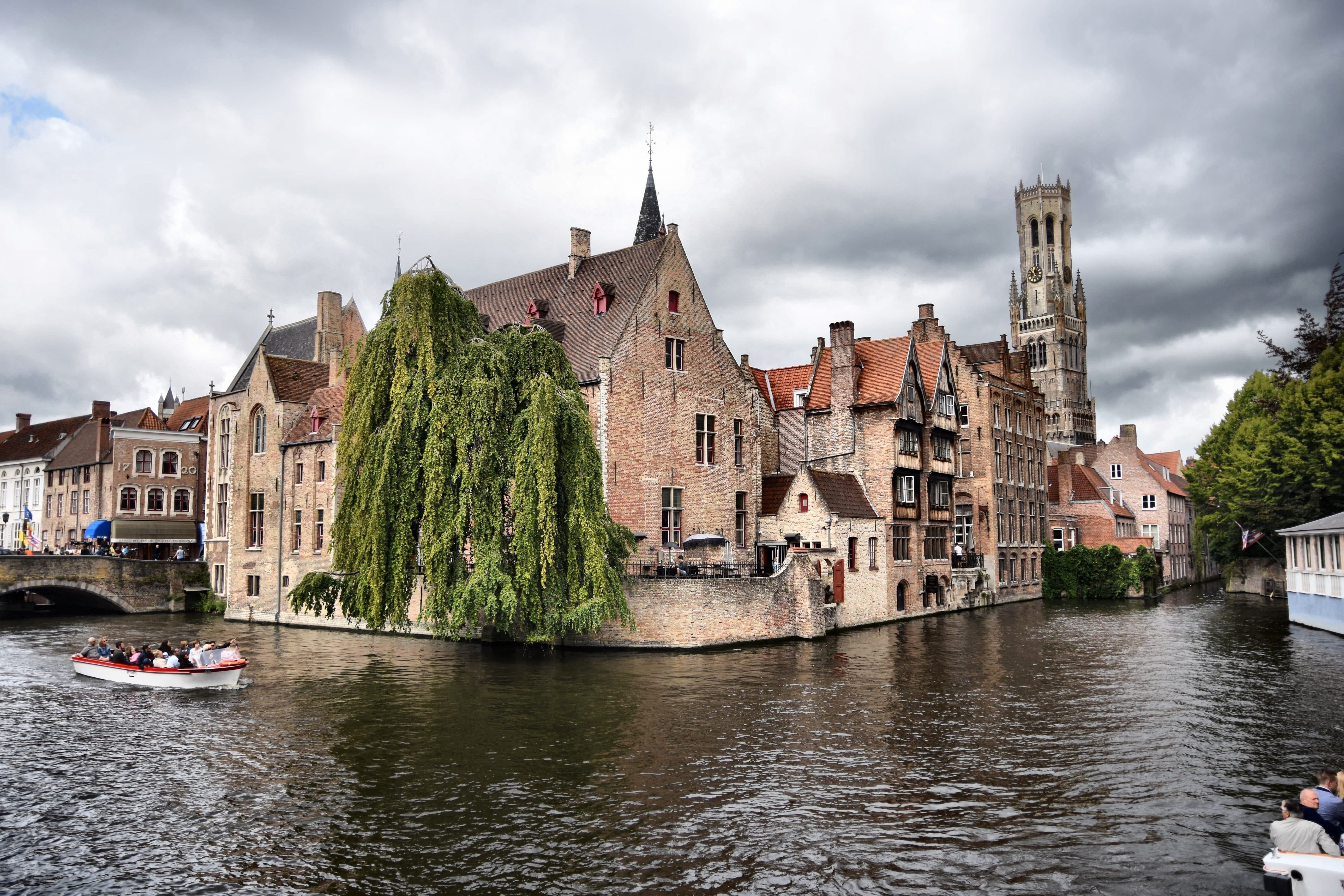 Known as ‘the Venice of the North’, the city of Bruges is a truly beautiful place to visit as part of a cruise. Ships dock seven miles away in the Zeebrugge Cruise Terminal, and if you decide to explore the city alone rather than on a shore excursion, there are regular trains from Zeebrugge to the city centre, otherwise consider a taxi.

Bruges is one of the most well-preserved Medieval cities in Belgium. The city’s name means “pier” which it received due to its long history as a shipping port. Today, the river that once ran through the city has been re-directed to make more room for the many visitors which it receives. While it deserves a few days to fully explore, as a small city, it is still possible to get a real feel of what the city has to offer during a day visit.

While Bruges attracts a large number of visitors each year, the city has preserved its historic legacy and sense of integrity. The buildings are simply breath-taking, with structures that reminded me of life-size gingerbread houses. Any time of year is a great time to visit, but I particularly loved visiting in December to experience the Christmas markets and have a go at ice skating in the city centre.

I believe one of the best ways to explore new places in by cycling around, and Bruges is a perfect city for a leisurely bike ride. During one visit, my partner and I rented bikes for a couple of hours and cycled 6km down the river, past rows of stunning windmills, to Damme, a lovely village in the greater area of Bruges. This medieval town is reminiscent of a more peaceful, miniature version of the city of Bruges and boasts many historic monuments like the 13th-century Sint-Janshospital and the Schellemill.

After stopping in Damme for a coffee in a cosy café, we headed back to the city centre and rewarded ourselves for the leisurely bike ride by sampling the local beer and devouring a hearty lunch in the city square. While food and drink here will be more on the pricey side due to its location, it is definitely worth the extra euros to be able to dine al fresco and soak up the atmosphere.

After the bike ride and lunch, there was still plenty of time to wander around the city, explore the shops and try the local delicacy (chocolate and waffles) before heading back to the ship.

As one of my favourite ports of call in central Europe, Bruges is certainly not one to be missed.