Copenhagen started life out as a fortress to defend against Wendish pirates and has grown to the dynamic, fashionable and trendy city it is today. Fought over for centuries by the Danes and Swedes, Copenhagen emerged by the end of the 17th Century as the capital of Denmark and was a bustling trading post, with architecture inspired by Dutch planning, including a canal system. Sadly, medieval Copenhagen was destroyed by the fires of 1728 and 1795, although the main architectural highlights such as the Børsen, Christianborg and Rosenborg survive to admire today. Welcome to our Copenhagen cruise port guide.

The port of Copenhagen has three terminals for visiting cruise ships: Ocean Quay, Langelinie and Nordre Toldbob. Regardless of where your ship docks, you’ll need to utilise public transport to get into the city if you are not on an organised excursion. Taxis are always available from all terminals. Check out https://www.visitcopenhagen.com/copenhagen/planning/transportation-cruise-terminals for how to access the city using public transport from each terminal.

The personification of the city of Copenhagen and international symbol, The Little Mermaid statue is positioned on a rock by the waterside of the Langelinie promenade, close to the Langelinie cruise dock. Based on the character from Danish author Hans Christian Andersen’s 1837 fairy tale, the statue was commissioned by Carslberg founder Carl Jacobsen in 1909 and was sculpted by Edvard Eriksen and based on ballerina Ellen Price (in fact the head is modelled on Price and the body of Elaine Eriksen, the sculptor’s wife, as Price did not agree to model nude). She is the most iconic image arguably in the city and a must on any visit.

The home of the Danish Royal family, made up of four identical palaces overlooking a central square with the equestrian statue of King Frederick V. This is where you can get up close to the royal guard, who man stations at the front of each of the palaces and patrol the square, before a guard change over every day at 12pm. The only palace open to the public is Christian VIII’s palace housing the Royal Danish Collection.

One of the prettiest parts of the city, this waterfront consists of multicoloured merchants houses from the 17th century that now house bars, cafes and restaurants. From the harbour you can take sightseeing boat tours of the city and admire the wooden boats that line the dock. Hans Christian Andersen lived at No. 67 between 1845 and 1864. At the southern end of Nyhavn you will find Kongens Nytorv (King’s Square) which is the largest square in the city, and around which are located many important buildings, including the Royal Danish Theatre, Charlottenberg Palace home to the Academy of Fine Arts, Hotel D’Angleterre and Magasin du Nord department store.

At 1.1km, the pedestrianised central thoroughfare is one of the longest shopping streets in Europe. Made up of several streets that span off it, Strøget is formed at one end by Kongens Nytorv and Copenhagen City Hall and City Hall Square at the other. This is the place to head for all retail therapy in the city, as well as many places to eat and drink.

Located on the island of Slotsholmen in the heart of the city, and the original location of the founding of Copenhagen in 1167, the palace is home to the three supreme powers of Denmark: the executive, the legislative and the judicial powers. Inside the palace can be found the Danish Parliament, the Prime Minister’s Office and the Supreme Court, as well as rooms used by the monarchy and the Royal Stables.

Situated on City Hall Square at the end of Strøget, the current building was completed in 1905 and was inspired by Siena City Hall in Italy. Two previous city halls burnt down in the fires of 1728 and 1795, with the last city hall prior to this one opening now home to the Copenhagen Court House. As well as being home to the municipal council and Lord Mayor’s office, City Hall contains Jens Olsen’s World Clock, an advanced astronomical clock with 12 movements and 15,448 parts.

If you want a family-themed day out, then consider spending your time at Tivoli Gardens, the world’s second-oldest operating amusement park. It really is something else and from the moment you enter, you’ll feel like you’ve stepped back in time. It first opened its doors in August 1843 and it’s still a much-loved attraction to this day. There are rides to enjoy, shows, numerous shops and food outlets, beautiful gardens and animals.

Located on several artificial islands between the larger Zealand and Amager islands and surrounded by the Inner Harbour and canal system, this area of the city was once the home of merchants and traders who exerted a level of autonomy from the rest of the city. The area is the most bohemian part of the city, with a fashionable and diverse atmosphere. Vor Frelsers Kirke (The Church of Our Saviour) can be found here, most famous for its helix shaped spire which can be climbed for stunning panoramic views of Copenhagen, although you need to negotiate 400 steps to get to the top, with 150 of them on the outside of the 90-metre-tall spire.

Located in Christianshavn, this international commune founded in 1971 has caused controversy throughout its history as a squatter’s camp, but the city council are slowly cleaning up the image of this liberated area and it is a popular area for tourists due to its laid-back attitude to life and quirky architecture.

‘So good the Dane’s hate to see it leave’ has been a popular slogan of the nation’s major beer, and Visit Carlsberg is the tourist experience for beer lovers, located in the old brewery dating to 1847. Here you can see the world’s largest collection of beer bottles and learn about the history of beer and Carlsberg.

King Christian IV had this gorgeous and ornate renaissance palace built in the early 17th Century as a modern replacement for the ageing Copenhagen Castle. It acted as his pleasure palace on land outside the then city walls, with a park and kitchen garden to entertain in during the summer. It is now home to the Crown Jewels of Denmark and the grounds and buildings can be visited by the public.

NoFlyCruises recommends https://www.visitcopenhagen.com the official tourist site for the city.

The currency in Denmark is the Danish Krone.

When cruise ships tend to visit the city (May-September) the city experiences its warmest months of the year. July and August average temperatures of 20 degrees Celsius. The city is influenced by its proximity to surrounding bodies of water, so it does tend to get cool in the evenings.

As a large, spread out capital city, Copenhagen has an extensive public transport system consisting of buses, trains, metro and boats. Walking and cycling is widely encouraged across the city, and you can rent bikes from shops, or utilize the Bycyklen public bike rental scheme, with docking stations across the city. For more information, prices and updated services check out https://www.dsb.dk/en/

For Hop On Hop Off services, including information on the routes and prices, check out https://city-sightseeing.com/en/16/copenhagen

As a large city, petty crime does occur in Copenhagen. Be aware of key areas for large crowds such as Strøget and the main transport hubs of Copenhagen Central Station and Nørreport.

Known as The Bridge Street Kitchen, this outdoor dining area is located on the Greenlandic Trade Square at the end of the Inderhavnsbroen connecting Nyhavn with Christianshavn. It is a street kitchen, a collaboration between various local culinary businesses, and a focus on high quality produce and a taste experience. There are four different bars for a variety of beverage options and the food stalls include Gasoline Grill (homemade burgers and lemonade), Dhaba (Indian street food), Haddock’s (Danish fish and chips) and Crêpes à la Carte (sweet and savoury). This is the perfect place to sit and watch the world go by and sample a taste of the world in Denmark.

Home to the largest street food venue in Scandinavia, home to over 50 start up and innovative street food stalls, bars and craft workshops. Across the inner harbour in Christianshavn, its dynamic location with indoor and outdoor dining areas creates a buzzing atmosphere and place to hang out and immerse yourself in the Hygge lifestyle. With so many food options to choose from, it is always worth checking the website for the latest options as it changes year to year. The guarantee is that the food creative and uses the highest quality organic local products where possible, and with a commitment to reducing food waste and to recycle as much as can be. 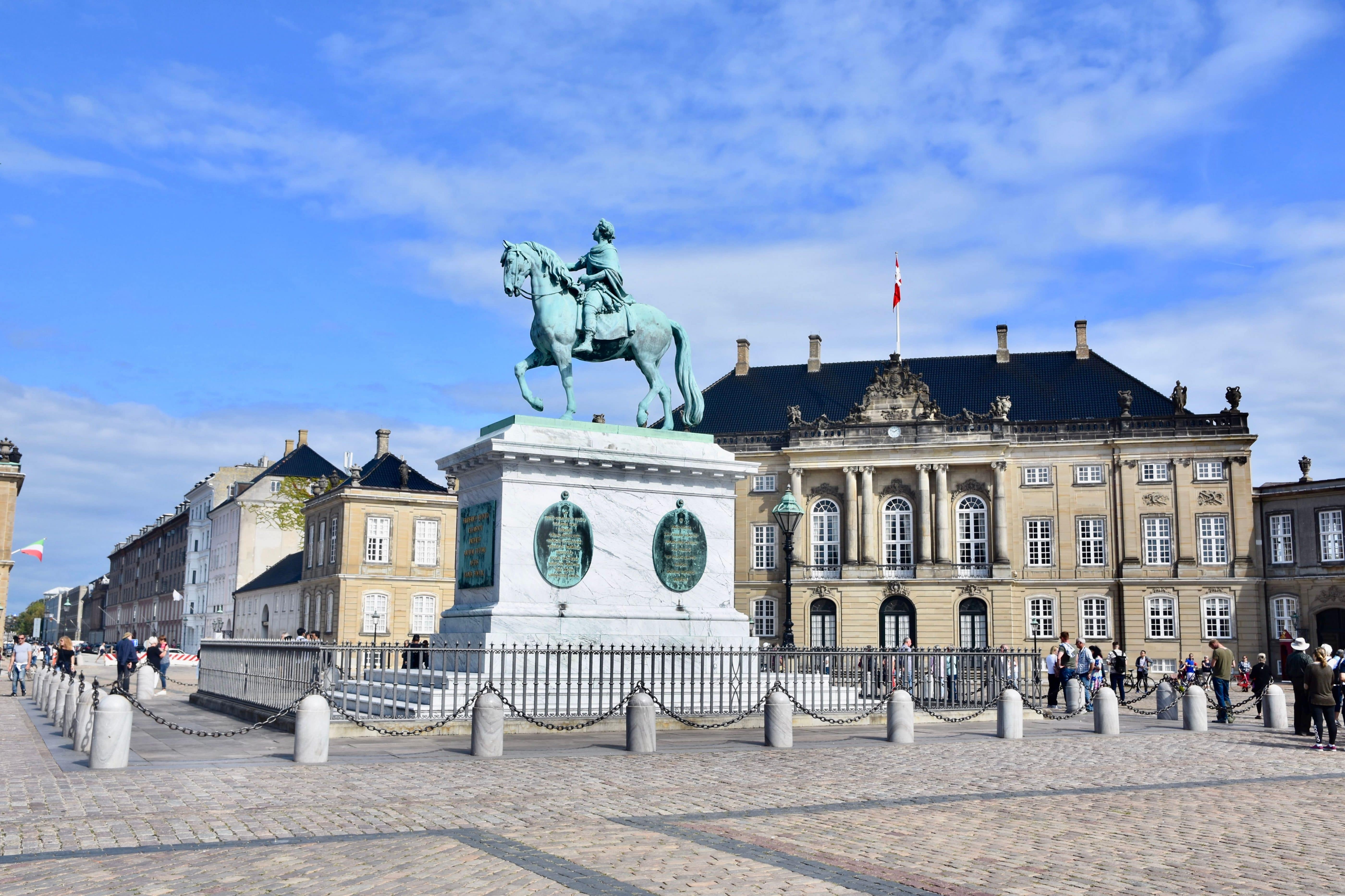