2020 Staycation cruising in the Highlands of Scotland with European Waterways 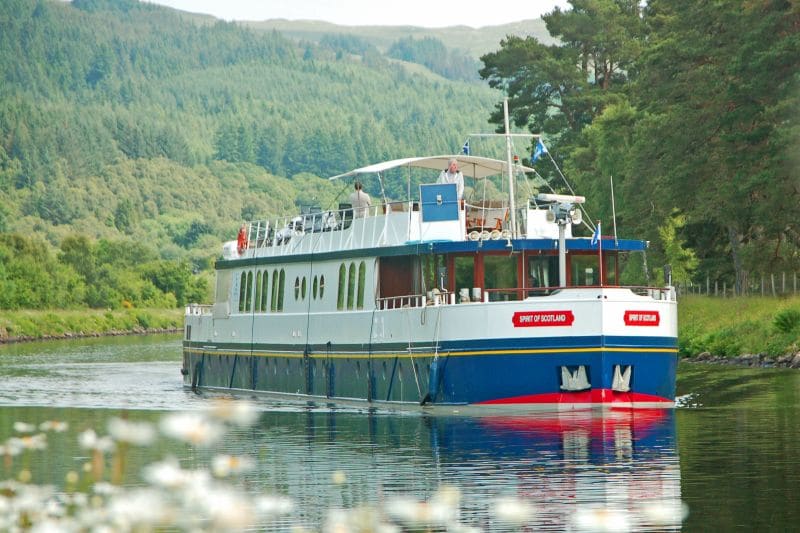 Following the re-launch of its Scottish cruises last month, European Waterways has introduced a special offer of 20% off cabin bookings on three selected departures aboard the 12-passenger Spirit of Scotland cruising through the majestic Scottish Highlands. The three, 6-night cruise departure dates with the offer applying are: September 20 and 27; and October 4, 2020.

In the Right Spirit

Spirit of Scotland (and its sister barge Scottish Highlander) cruises Scotland’s fabled Caledonian Canal.  The vessel hosts just a small group of like-minded travellers – or families and small groups, when privately chartered – through what feels, to many, as an enchanted and unspoiled land far from civilisation.  The cruises reward guests with sweeping natural vistas of shimmering lakes, mystical glens, and diverse wildlife.  Onboard, guests enjoy gastronomic meals featuring the best in fine wine and traditional Scottish fare, such as salmon, game and

seafood, with meals prepared by their personal Master Chef.  Every day, as part of the cruise, guests go on guided excursions to castles, aristocratic estates and tours of legendary sites steep in history and local lore.

Since the vessels often travel just a few feet from the shore and pause at canal locks along the way, guests can step off at numerous points to take leisurely walks or jog along the level towpaths.  They can also ride the bicycles included onboard, either on the towpath, or to explore the terrain and small villages nearby, and catch up to the hotel barge at a later stop.

Excursion highlights include a tour and private tasting at Scotland’s famed Tomatin whisky distillery.  Guests also visit Eilean Donan, a thirteenth century castle in near-perfect condition that sits on a small island where three sea lochs meet.  They also visit the ruins of Urquhart Castle, which played an important role in the Wars of Scottish Independence.  Sitting on the banks of the renowned Loch Ness and now in ruins, the castle is still one of the most visited sites in the country due to its historical significance.

For Shakespeare enthusiasts, a visit to Cawdor Castle – often cited as the inspiration for Macbeth – is a memorable occasion. And, while few guests have had the good fortune to photograph “Nessie” – the camera-shy resident of Loch Ness– they all return with exciting pictures of the Birds of Prey demonstration that is held on the shores of the famed lake.  In this event, owls, falcons and eagles display their hunting prowess and audience members can take pictures of themselves holding these regal birds on their arm.  It’s one of the numerous “insider experiences” available to European Waterways’ guests.